People who think I am a downsizing/minimalist fundamentalist, are surprised when they come into my livingroom and see a number of wall hangings. We don’t have many, but almost all of them are handpainted art (like the family portrait featured in this post). They are all gifts, and have a personal touch.

For example, the piece in the photo above was made for me by a calligrapher I met near Babolsar in northern Iran, on the coast of the Caspian Sea. It is the opening line from an Omar Khayyam poem, that translates into English as “Arise o gracious treasure!” I originally hung it up over my bed.

The artist, Farhangi, was knowledgeable about Japanese calligraphy, and wanted to show me how it was done without a brush. He wrote this out, signed it and gave it to me, joking about its potential worth. I put in a camel bone frame bought at a bazaar in Tehran and have had it hanging in every home I have lived in since receiving it in 2004. It is an important token to me, a good story-piece for when people come over, and the poem is pretty good too!

If I really wanted to, I guess I could get rid of it… . But it costs nothing to own, either in terms of space or environmental impact, and it spruces up the place a bit, making our living space interesting without any clutter. Besides this piece, we have our family portrait, a Japanese calligraphy piece, a painting of the Seven Lucky Gods, and this piece by a local artist and friend of my wife. None are mass produced, or kitschy, so I do not feel they impinge on our downsizing lifestyle, though admittedly they will have to go if we ever transition to a tiny house. 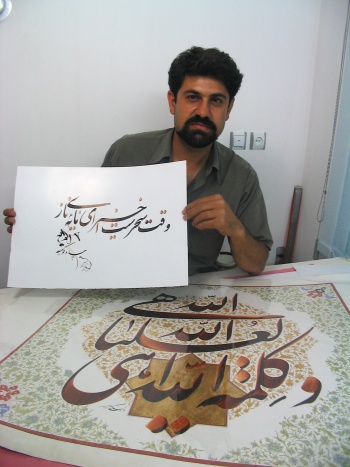 Farhangi pictured with completed piece, and one of his other elaborate works. 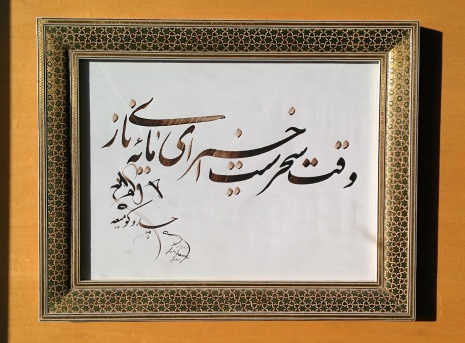 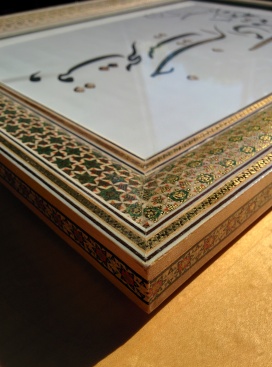 Camelbone frame I picked up in Tehran. 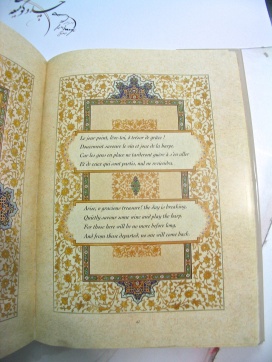 Beautiful book with French and English translations where they showed me the line.