Foreign Affairs, Trade and Development Canada announced $9 million dollars in funding in partnership with the Munk School of Global Affairs at U of T for something called the “Digital Public Square project.” The CBC dubbed the project an experiment in digital diplomacy. The Globe called it “direct diplomacy.” The coverage in the National Post, Toronto Star et alia related how the project aims to allow government firewall circumvention, information sharing, and increase government accountability for citizens in “oppressive societies.” Leaving aside the questions around the efficacy of “digital diplomacy” (UPDATE: Taylor Owen outlines some of the perils), I was curious as to why there were no details on the “how.” Where is this money going to? Much of the news coverage focused on current efforts to engage Iranians, which is pretty confusing since the project seems to be about spreading to other countries. But how can we tell? There is no roadmap, and the hard questions have yet to be asked by the press. How can you announce $9M without saying how it will be used?

Until we get some more information, I took a look at the current Munk Center-backed program to engage Iranians.

The Global Dialogue on the Future of Iran site and its accompanying Google moderator sites sure don’t seem like something you throw $9M at. 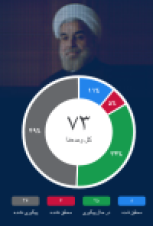 The Rouhani Meter is some pretty good transparency propaganda, but Iran is awash in foreign propaganda (see below). The results seem impressive:

On May 10th, 2013, the Munk School launched a new kind of digital public square for Iran. … within two weeks, more than 360,000 unique users had connected with the Global Dialogue from inside Iran, and had visited the site over 1,490,000 times.

My experience was like this too. In 2004, during Ahmadinejad’s antagonistic era, I was in Iran covering the US presidential election (when George W. Bush was elected for a second term). Everybody wanted to talk to me about politics. Admittedly, I did spend most of my time with the kind of people who would hang around foreigners. They all listened to the BBC because they couldn’t trust their own newsmedia. However the blue-collar folk that I stayed with for my last week thought the BBC was propaganda. There are sharp divisions in the country to be sure, but Persian-language satellite channels, radio, websites etc. abound, especially thanks to the diaspora in Los Angeles. For years now, there has been a lot of civic activity around getting anti-regime voices to Iranians in country. I am unclear as to how a “digital public” square would be perceived any different. And it doesn’t explain how Iranians are being protected online.

So why is the Canadian government putting $9M in? That is a princely sum for a small startup guy like myself. Just from the news coverage, I don’t get it. I reached out to the Munk Center on Twitter and they recommended a couple of sources. Again, they related only to the current Iranian efforts, nothing about the future. Still, it did answer a couple of my questions.

For example, circumvention. Psiphon originated as a project at the Citizen Lab (one of my fave orgs). They use a combination of VPN, SSH and proxies to get you around official barriers. Open source too. I am sure these guys could use some funding, so I hope they see some of that 9 mil.

Another org Munk pointed me to is ASL19, which seems like a sort of Citizen Lab focused on Iran. They have links with other orgs and other cool sites like Meidoon Watch which is kind of like a Hacker News for Iranian stuff. Seems useful. I wish I knew how much activity on that site is actually from inside of Iran. The Iranian diaspora is in the millions.

There is certainly a network of organizations working on the Iran problem. The new Foreign Affairs money must be going to replicating these networks in other countries. I am just frustrated that Foreign Affairs and the Munk Center aren’t giving us more information on their plans, and that the press hasn’t asked for more. Sorry for this rambling post, but there is a bit of an information vacuum here, and I thought I would draw attention to it. I will gladly update this post if someone can provide answers. Or feel free to add some in the comments.