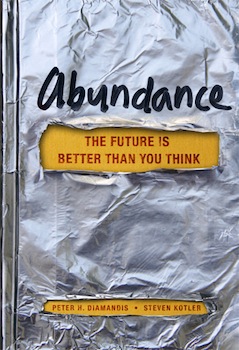 Abundance: The future is better than you think by Peter Diamandis and Steven Kotler

Abundance is a book of two parts, with a sprinkling of Singularity University and XPRIZE promotion and some nice little autobiographical tidbits. The first part introduces the arguments against abundance (Thomas Malthus, Club of Rome, etc.) and attempts to brute force them with tons of data. From this section I can tell Diamandis and Kotler are well-educated technology optimists, and that they read many of the same books as me. You may recognize the arguments of Kevin Kelly and Chris Anderson among others. The second part of the book is a whirlwind tour of exciting and inspiring advancements, some of which I knew about and others which I intend to investigate further.

Of the many themes presented, I think they circle back to one thing: we live in an age of exponential growth, where technological capability is rapidly expanding while conservation of needs are at the front of our minds. One reason for this era of the exponentials is that more and more of our science and innovation (eg. biotech) are effectively being turned into information science problems. To get a taste of this, here is Peter talking about the 6 Ds of exponentials:

All 6 of those Ds make multiple appearances in the book.

The collaborative problem-solving potential of the internet- connected world-brain made up of billions of progressive individual humans is a common technology optimist theme. But the book does not take a critical approach. The authors present a series of amazing successes yet do not provide any context. What about all the failures? Regarding the successes, what (small) percentage of the total attempts do they represent? Cynicism and pessimism about the future are the only real contexts they provide, and maybe that is good enough. When people say that we live in an era on the brink of utopia, this book represents a great collection of the evidence for that point of view. As far as Diamandis and Kotler are concerned, the alternative narrative is already the dominant one.

Some people will take issue with Diamandis and Kotler’s supreme faith in technological solutions to the world’s problems. Their backing of genetically engineered food and fourth generation nuclear power are presented perfectly aware of the knee-jerk political reaction. I am confident this book will be viewed as a trove of solutionist bias. However Abundance is by no means a thorough philosophical treatise about progress to be studied generations from now. It is an inspirational and is self-admittedly soon to be out of date. The afterword specifically addresses this point, inviting readers to the website to learn about more recent advancements. If you are looking to be inspired and want to learn about edges of current technological progress, would recommend you read this book sooner rather than later.