The City of Kelowna is holding public consultations in an effort to re-imagine what the Capri-Landmark area will look like in the next few decades. This week I was invited to speak at one of the workshops about my perspective on active transportation. Essentially, I gave the same talk that I did at OnPoint last year when I argued that car ownership is merely cultural and that it can and should change (and of course I plugged OGO carshare, as always). But I did give it a little twist, focusing on the relationship between culture and infrastructure, and also tried to inject some urgency into the issue.
END_OF_DOCUMENT_TOKEN_TO_BE_REPLACED

“Canada is a multicultural patchwork quilt, a country of immigrants.” These are common refrains about our country. Canada is home to over 200 ethnic groups, and has an official multicultural policy since 1971 (instituted by Trudeau the elder). Yet xenophobia and racism still remain, and multiculturalism is still a hot debate. The debate is not just between the natural-born and the immigrant, but also among the immigrants themselves. That is the topic I would like to explore below.
END_OF_DOCUMENT_TOKEN_TO_BE_REPLACED

I am travelling in the capital region of the United States right now on business. I took a day to walk the National Mall in Washington, DC. It was a gorgeous day, sunny but not hot. The wind made it deceptively cool, and I got a terrible sunburn.

I walked the 5km from Union Station to the Capitol Building, the Washington Monument, and finally to the Lincoln Memorial. The National Mall is massive. This is America doing BIG at its best. The architecture, design and sheer size of the monuments is awe-inspiring.

The Capitol Building had some protestors on the lawn. I didn’t get close enough to find out what they were protesting — being a foreign citizen I didn’t want to get swept up in anything. I was shocked at the size of the Washington monument. I thought that it was just an obelisk. The thing is massive and has an elevator inside! The thought put into the design of the Reflecting Pool and the Korean War monument is amazing. Below is just a few of my pictures. You can see all 45 photos and videos on Flickr →

I was really there! And not sunburned yet

Protests on the lawn

Inside of Union Station

The Washington Monument is YUGE!

As close as they’ll let me to the White House

From the Lincoln Memorial, I took a quick taxi to the White House. There were lots of school groups around on the day. You cannot get tours of the White House as a Canadian anymore. I walked around the north side and the south side, and then to the White House Visitor center, which is open to the public. On my way I was stopped by some very aggressive yelling police (actually, pretty much all the police in DC were like that). Everyone on the sidewalk was told to freeze while they blocked off the roads for some sort of presidential motorcade. Of course, everyone including me took video. I am not sure if Trump was in that car or not, but it was quite an entourage.

DC is a really nice looking city, much cleaner than most of the US cities I have been to. Mind you, I was only in the hipster Adams Morgan neighbourhood, with its tree-lined streets and classic buildings, and downtown in the capitol area. Still, it was pleasant. Contrast it with Baltimore, which I visited the following day. I grabbed a taxi from the train station and we were heading downtown. I could see a massive building with late 19th century copper roofing, similar to the parliament buildings in Ottawa. I asked the driver what that building was — literally the first interesting building I saw — and he replied simply, “Jail.”

I am staying in the inner harbour in Baltimore and it is all under contruction/gentrification right now. Red brick of the old industrial town is giving way to glass facades. It isn’t very reminiscient of The Wire at all, and I am glad for it. 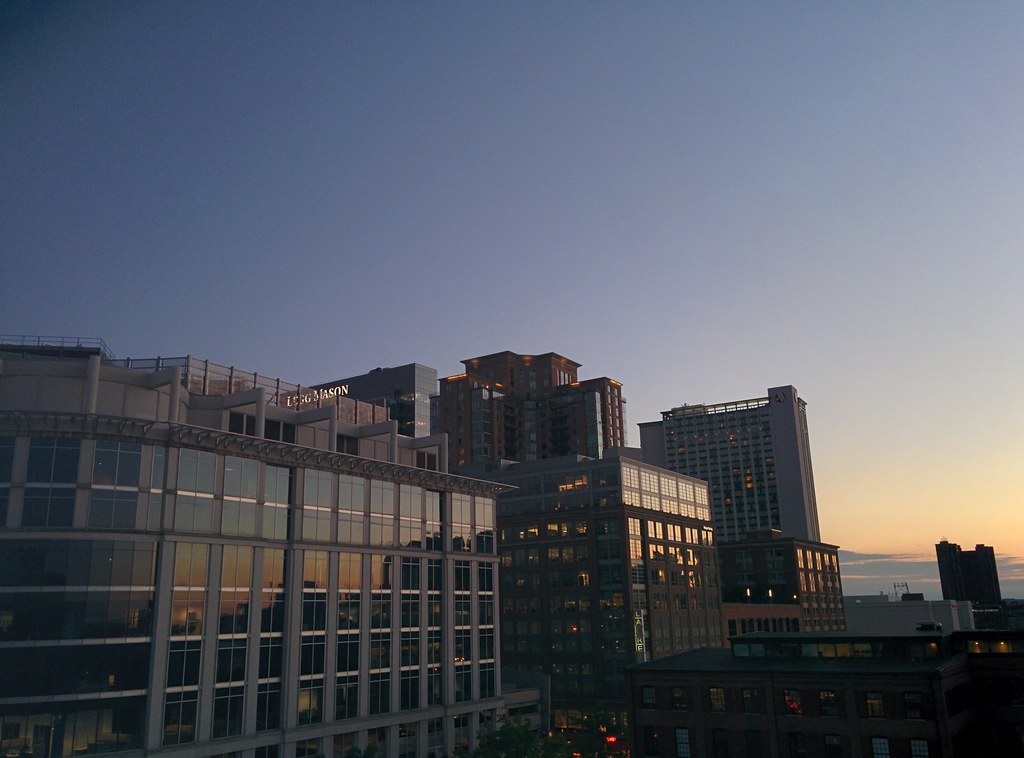