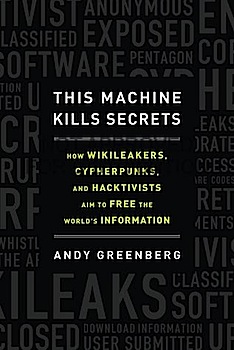 This Machine Kills Secrets: How WikiLeakers, Cypherpunks, and Hacktivists Aim to Free the World’s Information by Andy Greenberg

“Hacker culture” is often characterized by curiosity, meritocracy, independence and self-reliance. It is no wonder that libertarianism enjoys such prevalence in Silicon Valley. “Freedom through encryption” is the clarion call of a certain subset of hackers identified as crypto-anarchists or the related cypherpunks. To them, personal responsibility is the power to protect one’s thoughts and transactions (money or ideas) through encryption, without depending on government or other institutions. Furthermore, they believe democratized cryptographic tools protect the freedom to speak up when an individual sees something wrong, such as in the case of whistleblowers. Andy Greenberg’s excellent book gives a tour of the tools and philosophy of the cypherpunks through the story of the rise and fall of WikiLeaks. This Machine Kills Secrets examines the power shift between individuals and institutions using good old investigative journalism. The content is deeply researched and revealing, however the absence of analysis makes the reader want more. That said, the book’s lack of criticism is — so to say — a feature not a bug. Critiquing the cypherpunks is not Greenberg’s role, his is unearthing stories and data for future critics. This Machine Kills Secrets is truly is a work of history, and the result seems well-balanced.

Of particular interest is the dream of a universal culture of leaking. Greenberg interviews Rich Jones, developer of OpenWatch and Cop Recorder, whose goal is to “create a transparent society by force” by turning everyone’s smartphone into “reverse surveillance cameras”. He says:

Radical transparency is a concept due for further exploration. Transparency is asymmetric, meaning those that retain power must be transparent to those under their power, but those under power must be protected from those in power. What does this mean for crypto-anarchists who strive to remove any and all hierarchy? I would be curious to know if there is a science fiction novel that has explored this concept, sort of a reverse 1984.

In the meantime, I highly recommend Andy Greenberg’s book. To get a taste, check out his appearance on the podcast Surprisingly Free.

So far this has been an explosive year for the Kelowna startup community. For the past few years the community has been germinating inside the Kelowna Innovation Center, which served as the single hub for all startup activity. Now we are seeing more and more happening beyond those walls — a positive development and a signal of maturation.

Local startup legends Vericorder and Vineyard Networks (now part of Procera) scaled out of the KIC years ago. Many of the early stage startups in Accelerate Okanagan have been hoping to do the same. Last month Syndicate Theory left with Cityseed to join another stealth startup at the new Rocketlaunch space. This past week FreshGrade moved into a new space called Wheelhouse and Just be Friends set up their new office space. Soon Hyper Hippo will be moving into a brand spanking new building, and I suspect taking with them one or two other small outfits from KIC. Furthermore there are rumours of two more startup-centric spaces on the horizon. This might just be #startupkelowna’s Big Bang moment.

All of a sudden we have transitioned from a single to multi-hub community network. Such a distributed system is great for innovation, but we must remember that it is an ecosystem. As a community we must double our efforts to keep the communication lines between the hubs open to prevent isolation. We at Rocketlaunch intend on hosting events for developers in our space, and you will always be able to see the Syndicate Theory boys at the various tech meetups in Kelowna. I implore the other hubs to do the same or better. There will be growing pains, but we have the lessons of many other communities that have followed this path before us.

What are you going to do?